There are several elements of turning a thread. The two most important elements are

Using the correct method of each will greatly affect tool life, cycle time and part finish.  We'll cover each aspect separately and explain why a "modified flank infeed" and a "modified volume DOC" are the preferred methods.

The most common infeed method, a radial infeed is  the easiest method to program but it's going to result in the absolute worst tool life and the worst-looking threads. The insert cuts on its nose and both flanks all at the same time on each pass. You are wearing the insert substantially more because you have more surface area in the cut.

Insert flank rubbing can be minimized through a “modified flank infeed” approach, in which the insert leads into the workpiece with at least 1° of clearance on the side of the tool. You will still get the same thread profile because the insert is actually coming down along that same 60° or whatever the thread flank angle is, but you are not rubbing along that entire cutting edge.

The flank infeed method reduces machine load and chatter by minimizing the area with the workpiece. It's recommended when:

The flank in-feed method provides excellent chip control as chips flow away from and not toward the tool. This prevents chip tangling, especially in internal threading applications﻿﻿

Try the modified flank in-feed method by approaching the material with an angle of 1 -3 degree for better surface quality and wear.

One of the major benefits of the flank in-feed is that the spreads the depth-of-cut along the cutting edge which improves insert life: There is less DOC wear in on spot on the insert.

There are three ways used to control chip volume.  We'll look at each one so that you can see the differences. 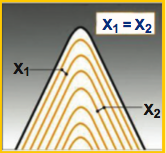 Constant Depth - In the constant depth thread turning approach, each pass is calculated for the same depth-of-cut (DOC) on each pass. The object is to maintain a constant DOC. Constant infeed is easy to program; DOC for each pass can be determined by dividing the thread height (difference between major and minor diameters) by the number of passes. The main disadvantage of the constant depth approach is that the load on the insert increases with each pass deeper into the thread form because the tool removes successively greater volumes of material. Tool life and part quality suffer. 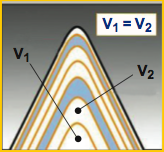 Constant Volume - In the constant-volume thread turning approach, each pass is calculated to remove the same volume of material on each pass. The object is to maintain a constant load on the cutting tool. The formula to calculate constant volume states that the accumulated depth after each pass should equal the initial DOC times the square root of the number of the pass.

As the thread deepens, the tool takes a smaller DOC on each subsequent pass. The method is not without special considerations. Removing the same volume of material on the first cut as in later passes may overload the tool tip on that first pass. To minimize chances of overload, manufacturers recommend reducing the DOC on the first pass and adding the amount of the reduction to the second pass. 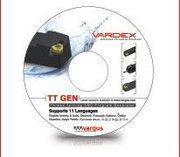 For a fast easy solution download the Vargus TT Gen (Thread Turning Generator). It's FREE! It's a simple-to-use, PC-based software program which guides the threading professional instantly to the recommended tools and cutting conditions for the job.

Sign in to chat!
/* inserts buttons below status update */